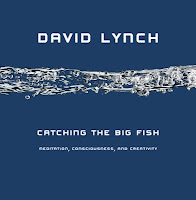 This lovely little book would appear to give some significant insight into David Lynch's creative process. I'm always interested in creative process, particularly from people with unusual perspectives. He feels no need to waste words in this, or trying to construct a narrative. The book is made of dozens of tiny chapters, each with a single thought, or a single anecdote. I found it very pleasant to read, and often quite inspiring. I'm working on a number of projects that I've been on for over five years, and it is hard to tell when, or if they will ever get completed -- and this can sometimes be depressing. To hear the story of Eraserhead, about how David ran out of money, and had to stop production, and started delivering papers to raise more money, and eventually got it done, really meant a lot to me. Listen to this:

Jack Nance, the actor who played Henry, waited three years for me, holding this thought of Henry, keeping it alive. There's a scene in which Jack's character is on one side of a door, and it wasn't until a year and half later that we filmed him coming through the other side of the door.

And I love this little story about the making of Inland Empire:

One day we were getting ready to shoot a scene called "The Little House," which involved Laura Dern and my friend Krzysztof Majchrzak, an actor from Poland. Krzysztof arrived in Los Angeles fresh from Poland and the CamerImage gang brought him over to my house. When he got out of the car, he was wearing these goofy glasses, and he smiled and pointed to the glasses.

So I got the idea that he planned to wear these things in the scene and I said, "No, no, no, Krzyszto." And he said, "I need a prop. I need a thing." So I went into my office and I opened up the cupboard and saw a little piece of broken tile, I saw a rock, and I saw a red lightbulb, but very transparent like a Christmas light. I took these things out and offered him a choice. "Take one of these, Krzysztof" -- and he picked up the bulb. I put the other things away. I wasn't going to let him have those anymore. I just gave him the bulb. So we went out to the small house and Krzysztof came out from behind a tree with the red bulb in his mouth, and that's how we shot the scene.

The whole idea of whether I am an artist or not, and if I am, what that implies, is something I have been wrestling with quite a bit over the past year. This book has helped me answer the question. I wish more creative people would write concise little books like this that tell stories of their creative process.
Posted by Jesse at 1:15 AM