the psychedelic furs: all of this and nothing 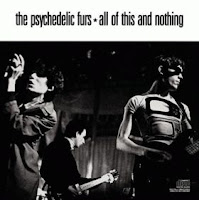 This is a compilation album of psychedelic furs songs that I found used somewhere. I was surprised to hear how silly some of these songs sound, it gave me new respect for the furs -- it's brave to try to sound serious when you are singing a song like "President Gas".

Whenever I hear new wave songs, my thoughts always go to the same place -- the first girl I fell in love with. It was 1985, I was in high school. I had seen her from afar, but didn't know her name. One day, we both "forgot" to bring our gym clothes to Phys Ed, and were banished to a dungeonlike room in the corner of the gym. She was reading something by Voltaire, and we got to talking about philosophy. I became slightly smitten, and a couple weeks later, she gave me a mix tape, which was mostly new wave. New wave was new to me, and we spent long hours on the telephone discussing the subtleties of lyrics, etc. Anyway, long story short, I fell in love, and she broke my heart, and now, whenever I hear new wave, I get a kind of bittersweet taste in the back of my mouth, which I wouldn't trade for anything in the world.

Out of curiosity, I went to the deep archive and found her old mixtapes. No Furs on any of them. Huh.
Posted by Jesse at 10:41 PM