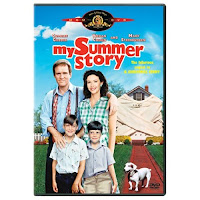 Also released as "It Runs in the Family", this is, like "A Christmas Story", a collection of Jean Shepherd stories neatly sewn together into a film. I had no idea this existed, and just happened to catch it as it was starting. I was delighted with it -- it had some of my favorite stories, like the gravy boat story, and some stories I'd never seen before.

I have to admit, Jean Shepherd has always been special to me. My father adored him, and, as president of the Denville, NJ Friends of the Library, one of his jobs was to line up guest speakers. In 1971, Jean Shepherd came to speak. My father picked him up at the airport, and I (one year old) rode along. This was before car seats, so I rode back from Newark to Denville in Jean Shepherd's lap. I've often wondered if it is possible for me to retain some memory of that? His voice is so distinct -- could it have imprinted?

Later, when I was maybe eight, my father let me listen to his Jean Shepherd record. I loved the stories (even the ones I didn't understand) and listened to it over and over. Looking at the cover now, I realize that my third grade obsession with drawing little stick figures climbing on people was in imitation of the album cover! Anyway, listening to him on the radio, and watching his TV specials was something that connected me with my father, and made me feel really grown up. I must admit that every time I go to Disneyworld, I visit the Carousel of Progress, really for no other reason than to spend some time with Shep, even if it is just his robotic form. So, watching this cute, well-made film was a wonderful, bittersweet experience.
Posted by Jesse at 1:03 AM