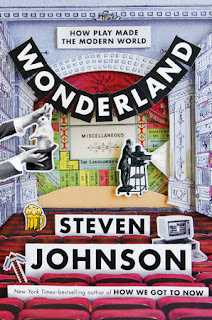 I was excited to see this book by Steven Johnson, especially given that I've liked some of his previous books, such as The Invention of Air, and Everything Bad Is Good For You. The central premise is that most serious advances in civilization begin in pursuit of pleasure, and often play. I believe this very firmly, it is part of what makes my life so interesting -- by focusing on new kinds of play, one is necessarily at the leading edge of technology, for while "serious" applications need new technologies to be at a certain level of maturity to be useful, playful applications can sculpt themselves around the strengths and weaknesses of the technology as it exists. One example I think of often is Hey You, Pikachu, the voice recognition game that Nintendo released in 1998. Of course, at that point the technology was so primitive that it often misunderstood what the player was saying, but the choice of Pikachu, who is mischievous and frequently disobeys his trainer, made it seem like it was part of the design. Johnson's book is full of dozens examples of this sort, going back to the beginnings of music, taverns, photography, and much else. The book was full of many stories I was very familar with (Hedy Lamarr using player piano technology to invent frequency-hopping torpedos, for instance), but also many about which I had never heard, including:


In all, it was a pleasing book, that I'm glad I read. I always have too many books around, more than my shelves can handle, and it is not a pleasing thing on the psyche. I have a pipe dream that I'll have an entry in this blog every day. Who knows? Maybe I can do it!
Posted by Jesse at 2:51 PM