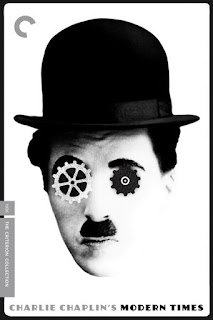 Here's another Chaplin film that everyone knows from the iconic gear scene, but I think very few people have seen all the way through. I really think of it as Chaplin's masterpiece. It presents itself as a silent film, but it isn't, really -- it has a recorded soundtrack, which includes talking -- however, it largely follows a creepy rule: In Modern Times, only machines are allowed to talk. The effects and editing are incredible, and the film keeps moving, vigorously, from scene to scene. I never thought about it, but the passion for creating 8-bit games at this point in time is a lot like Chaplin continuing to make silent films into the late thirties. The message of the film is fascinating -- when men behave like machines they are degraded, but when they behave like humans, they are the most elevated, and the most successful. The film doesn't rub your nose in this, but sneaks up on it, and implies it, with tricky things like Chaplin's famous nonsense song at the end -- it's such a human situation, a human solution to a very human problem. This film will stay relevant until we truly understand, embrace, and protect what it means to be human, and we have a long way to go before we get there.

Also: Yeah, Criterion Collection.
Posted by Jesse at 10:00 AM