How Much is that Doggie in the Showcase? 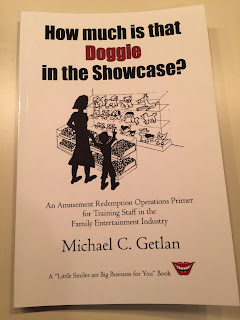 I found this fun little book, by Michael C. Getlan, in the Breakpoint Books display at IAAPA 2017. I've had a lifelong fascination with arcades and redemption games, and this book tries to give a rundown of best practices for someone running redemption at a family entertainment center. It makes an interesting argument that it is not the games, but rather the prizes in the redemption center are the core engine of desire that makes the entire place run, and as such, choosing the right prizes and displaying them properly is the key to success. It made me think back to my own experiences when I was younger with redemption centers. My experiences were mostly in arcades on the Jersey shore. I loved pinball, loved skee-ball, and loved the other weird ticket giving games. It is easy to chalk up redemption centers as a scam -- after all, buying the same prizes with cash money would cost a lot less than "earning" them by playing games. But the book points out that doing so is not nearly as fun, and suggests that the more fun a ticket-giving game is, the fewer tickets it should give out. Less fun, less time, more tickets. I still remember a glorious week I spent at the shore with a junior high friend where we visited a certain arcade once or twice a day for a long week. I had $40 to spend on the trip, and I believe I spent almost all of it there. During that time, I mastered Ladybug, which is an incredibly good arcade game, and my friend mastered Monaco GP. I also played a lot of skee-ball, very carefully and thoughtfully, and also a slot machine type game, the kind where you can stop the reels when you want to, making it a skill based game. I brought home a fancy painted beer stein and a bunch of toys and things, and I was very proud of my haul. I got disappointed looks from my parents, but I didn't really care. I had a great time, learned a ton about game design, and even got to know the proprietor a bit. I still look back on that week fondly to this day.
Anyway, this book isn't a masterpiece by any means, but it gives some good insight into the realities of running an FEC... or the realities of running one in 2007... some of the recent advancements in automated FECs haven't really been taken into account. I wonder if I'd want to run an FEC one day? I'm not sure. I sure do like the games, though!
Posted by Jesse at 1:23 PM