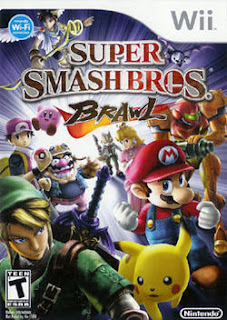 I've never really been into fighting games. I mean, it's fun to button mash, but actually trying to get good at them feels like boring work to me. My daughter was all into this one, though. I'd played the original, a million years ago, and I was kind of shocked at how intricate the rules are for controlling your character, and even for winning the game. But, the normal arena mode isn't what I want to talk about -- I want to talk about a transcendent experience I had playing the single player campaign.

I mentioned that my daughter was all into this game, and part of that involves a single player platforming adventure. I walked by and heard her cursing the game, and entering some kind of game induced delirium. I asked her how it was going, and she said, "I... I don't know. I've logged 12 hours playing this thing, and... I can't actually tell what's going on." This made me curious, and as she tried to show me the peculiar nature of "The Great Maze" section of the single player mode, I became fascinated. She brought up the map, which was a set of boxes, lines, flashing diamonds, and weird faces. I asked what it meant, and she had no idea. I said, "Well, what are the diamonds?" She stammered, "I... monsters? Treasures? I really don't know... there are green ones and pink ones and blue ones, and they do different things... and I..." Now I was really intrigued. We started to poke at it some more, and I realized that the normal rules of videogames did not apply here. Old school gamer that I am, I gleefully ran for pencil and paper, to try to make sense of this bizarre world. I had to explain to my daughter that in the old days, most games required you to make maps with paper. I'm pretty sure she didn't believe me. "Okay," I said, "bring up that game map again, so I can try to make sense of this." "I can't," she said. "You can only bring up the map in certain places." WHAT? Uh... okay... "But that's okay, I need to get back there, so I can get healed." "Oh, so the healing point is near where you can bring up the map?" "No," she explained, "the map heals you." Now I was in full-blown WTF mode. I can't remember feeling this way after 1989. It was very exciting! Gradually, I made a paper map, and through experimenting, we figured out what the faces where, and the diamonds, and how you can teleport, and where the monsters were hiding, etc., etc.... and it was the most videogame fun I'd had in years. I didn't realize how much I missed not actually understanding what was going on in a game, what was actually possible! It's got me wondering about a Lens of Mystery. But you know, there is something else. Part of what makes this thing work is the absence of anything like a sensible story. Why are 30+ Nintendo characters teaming up to fight some mysterious teleporting bald dude in a world that makes no sense? The game has no answer, and it left us to have to just decide for ourselves. And bit by bit, a little fantasy of us as adventurers with the ability to take on the roles of these characters, but trapped in a weird maze started to form... as we talked to each other, I found myself forgetting about us in the living room, and thinking of us more like movie characters, trapped in this strange world trying to decode its weird rules as we uncovered monsters and obstacles that got stranger and stranger. It worked so well because the characters had so very many options, and could do so very many things. Once we understood it, and beat it, I was pretty sad that it was over. I'll be thinking about how I can capture these feelings for my own games for a long time.
Posted by Jesse at 11:49 AM