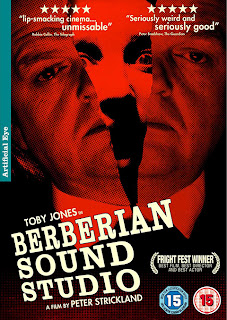 I'll be honest. This very arty film bored me. I felt like it was trying too hard, and repeating its message too much, and I kind of felt like I was looking at a situation where filmmakers are so in love with filmmaking that when they make a film about filmmaking they feel like it is okay to forget to edit the boring scenes, and the critics (mostly film school grads) feel like they have to say the film is so clever, etc., etc. And I was prepared to leave it at that. I mean, it was kind of fun, and kind of clever, but, jeez, it just went on for so long. (Not really long, only about 90 minutes -- but I came out convinced I'd just watched a 150 minute movie).

However -- I went with someone who felt differently. My filmgoing partner came out nodding, saying, "Yes... I know exactly how that feels." I asked questions, and he explained to me that the notion of being trapped in a situation where you are not brave enough to escape, even though you know you could, and you see it, each day, corrupting you more and more, was something he could completely relate to. I didn't grasp this at first, but the more I thought about it, the more I appreciated the film. And I must admit, though I was bored in the theater at times, I find the images, moments, tension, and the gradual slipping away of reality staying with me.
Posted by Jesse at 9:05 PM