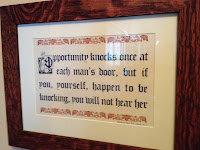 Okay, this is a long story, but I guess I have to tell it sometime. It's about Elbert Hubbard. Not L. Ron Hubbard, that's a whole other story, but Elbert Hubbard. (They are actually related, though not by blood. On top of that it has always seemed likely to me that "L. Ron" chose that peculiar name-phrase to connect to his famous uncle.)

I discovered Elbert Hubbard on my birthday, about ten years ago. I was poking around in a used bookstore (Caliban Books) and I found a cardboard box full of these neatly bound little book/magazine things that seemed quite old. Each was a "Little Journey" to the home of some great man or woman. Newton, Socrates, Hypatia, Beethoven, etc. They were dated around 1900. The printing style of the books was incredibly eye-catching, and, I don't know, I felt a kind of energy around the box. There was no price, but there were around 80 of the "Little Journeys", and the clerk said they had just come in, he hadn't priced them, and gave me a deal for the whole set, and he threw in a copy of "The Roycroft Dictionary" to go with it.

Over the coming weeks, I was completely taken with these bizarre little books. Each was beautifully printed, and contained a flowery biography. Weirdly, these biographies didn't stick to the facts. Each was about 30-40% biography, combined with wandering philosophical outpourings that I found bold and fascinating. That summer I was working on Carnegie Mellon's campus, doing some rather dreary software work, and so I was glad to be able to take a break at lunch, sit under a shady tree, and go on these Little Journeys to the homes of the great, with Hubbard as my guide.

There was so much in his philosophy that resonated with me. So much about where greatness truly comes from, about the importance of creativity, about doing great things because you must, because there is no other choice. I was pleased to learn details of the lives of these legendary figures (people who've read my book and wonder "Who the hell is Hypatia? Where does Jesse pick up this stuff?" need wonder no more), but with each book I read I became more curious about Hubbard. Weirdly, each of these books contained advertisements for other books as well as furniture, and other things, and through these ads, I gradually came to understand that:
- Hubbard was part of some group called "The Roycrofters"
- The Roycrofters were printers, but also seemed to make household goods, and hold "TED-like" conferences
- The Roycrofters had been located in East Aurora, New York.

Over the years, I learned more about Hubbard's life, about how he was a soap salesman who gave it up to start the Roycrofters, and how he and his wife went down with the Lusitania in 1915. And about his "Philistine" magazine, which cast stones at the topics of the day, back at the turn of the century. Hubbard and the Roycrofters were often on my mind, because their values ("Head, Hands, and Heart", making quality goods by hand, self-improvement, Emersonian self-reliance, etc. etc.) so resonated with mine. I would use his quotes in my teaching, and I would sometimes joke to students that I was Hubbard in a former life. Even the style with which I wrote my book, a bold first person, speaking directly to the reader, was very much under Hubbard's influence. And I sometimes wondered... was there anything in East Aurora left to see? My initial Internet searches revealed little. It seemed possible that the Roycrofters were forgotten.

But, in early July 2012, my family and I were driving home from a trip to New Hampshire, unexpectedly early, due to a change of plans caused by a death in the family. We were all somewhat gloomy, and I thought, you know, maybe this is the time. Maybe this is the right time to visit East Aurora. My new Internet searches bore fruit this time -- there was apparently an Elbert Hubbard Museum, a tour of the campus, and even a restored Roycroft Inn. It was a long drive from New Hampshire to Pittsburgh, and we needed a place to stay, and hey, guess what? The Roycroft Inn had rooms available.

I'm not sure I've ever felt more at home. The Inn is absolutely gorgeous, and decorated throughout with works of the Roycrofters, both hand-work and mind-work. The photo above is of a framed picture in our room -- a Hubbard quote I'd somehow never heard before. The room we were given was the "George Eliot" room, and I was pleased to see her name was carved into the door, just as "Beethoven" and others from the Little Journeys were carved into the doors of the other rooms. "How clever," I thought, "that the designers who restored the hotel chose to name the rooms after the Little Journeys." Later, reading a biography of Hubbard, I learned that naming the rooms that way was part of the original design of the Roycroft Inn, which was used partly as staff dorms, but partly to house visiting guests. And there was even an amusing anecdote about this that the Roycrofters liked to tell. They had hired a local craftsman to carve the names into the doors, specifically, Socrates, Edison, George Eliot, Beethoven, William Morris, and Susan B. Anthony. (Causing one visitor to comment, "An odd team, that.") After carving the names, the craftsman expressed disbelief to the other villagers at the madness of the Roycrofters: "They had me carve 'George Eliot' on the door. What if the fellow doesn't show up?"

Anyway, our stay in the George Eliot room was very pleasant, as was the entire Inn, the restaurant especially, as was our entire trip to East Aurora. We didn't get to see all the sights -- the Hubbard Museum was closed while we were there, but we did visit the copper shop, which sells works of local artisans in the Roycroft style, and it was thrilling to me to see the actual printing presses they used to produce the Little Journeys. Later, we had a lunch of ice-cream sodas in a candy store that was formerly the home of president Millard Fillmore, and we visited an old-time five and dime store. The headquarters of Fisher Price is nearby, too. The town has really embraced its arts and crafts history, you can see it everywhere.

Thus ends my tale of my first Little Journey to East Aurora. (Eerily, I later realized that the first Little Journey Hubbard published was, yeah, George Eliot... so, the room could not have been more appropriate for us.) I feel certain that there will be others. And I am pleased, each day, to look upon the framed sign I found in the copper shop that now hangs in my office, one of Hubbard's lesser known epigrams: