I found this little book years ago... at Townsend Booksellers, I think? Or did I have it in California? Anyway, it has been my stalwart companion, ever since. It is about as small as a book can be, just a few inches high, and only 14 pages long. It is full of ironic mottoes and tiny woodcut illustrations. There is something about it that reminds me of the seventies. It is clearly the work of a group of friends, each chipping in their own funny sayings, and their names are listed up front, and it was published in 1977, in fact. I love the attitude of this book, I love how it overflows with friendship, and how it acknowledges that things get bad, yes, and there isn't much you can do but laugh about that. I scanned not just the front cover, but the back as well, because I think the back cover sums up the book quite delightfully (click the pic to see full size). Some of my favorite mottoes within:


We've got plenty of firewood to last until Spring. -RLU

Greens chopped in an open fan tend to disperse. -AG

You discover the optimum number of children for your family when you've had one too many. -AD

If it doesn't fit, file it to a conical point. -WG

A motion to adjourn to the bar takes precedence over all other motions except one to leave the bar. -ER

So, after years of having this book accompany me through all kinds of problems and troubles, it occurred to me, one day, that I had no idea who Jane W. Roberts was. I'll start by saying she isn't this Jane Roberts. I had to websearch pretty hard to find out her true identity. I even had to buy online access to an obscure local newspaper that had an article about her, which I reproduce here, in full.


MONADNOCK PROFILE: It’s all there in the fine print

She keeps an art alive 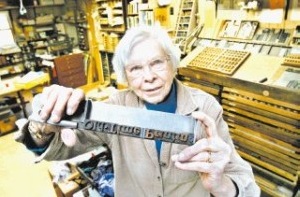 Jane Roberts believes that life should be lived to the fullest. Now 86, she’s a former social worker, teacher and award-winning commercial printer who also creates hand-tooled canoe paddles. Beyond that, she knits, recently learned to spin fiber and is a longtime member of Fitzwilliam’s zoning board.
And, she offers a very simple remedy for those who want more fulfilling lives.
“Always make sure you have a lot of hobbies and things you’re interested in doing,” she said. “If you’re one of those people who are bored, it’s your own damn fault.”
Among Roberts’ varied interests is her successful business, Old Time Printing, which, for more than 30 years, has offered Victorian and obsolete typography, mainly to the antiques trade. Although she retired not too long ago, she still plies the craft for friends and local organizations, and introduces young children to the practice.
Her home-based print shop is equipped with 19th-century antique tabletop and pedal-operated foot presses and nearly 300 different typefaces and fonts. She’s won awards for her work and, for nearly 60 years, has been a member of the Amalgamated Printers’ Association, an organization of letterpress print enthusiasts.
It’s a passion she first discovered in her teens.
“My father gave my brother a small printing press for Christmas,” she said. “He didn’t like it all that much, but I did. I bought it from him when I was 16. It’s been a big part of what I’ve been interested in since then.”
In the late 1940s, she worked her way through college as a printer. Besides running presses, she became proficient in typography, including Linotype, most commonly used for newspaper copy, and Ludlow, used for headlines and displays. She even operated her own business, which she sold upon her college graduation — then took a long hiatus from printing for 15 years.
Instead, she launched a decade-long career as a social worker, working with disadvantaged children in Hell’s Kitchen in New York and at Chicago’s renowned Hull House, the first settlement house in the country. A few years later, when the Chicago neighborhood underwent urban renewal, her job was eliminated, and she chose a new path.
“I still wanted to work with kids, but I’d had it with big cities,” she said. I knew that, for me, the way to work with kids was to go back to school to get a license to teach.”
She enrolled at the University of Massachusetts Amherst, where one night at a square dance she met her future husband, Ken, then a faculty member. The pair married a year or so later, and she taught school in Connecticut for several years, starting out at the junior high level, then moving on to high school English classes.
Her interest in printing was rekindled when her husband discovered and purchased an old press at an antiques shop.
“I’ve had a number of small presses over the years,” she said. “I like to see what I can do to repair, rehabilitate and get parts for them to get them working.”
After moving to Fitzwilliam in 1973, the couple installed a print shop in their home. Roberts started her business and, for a while, additionally sold puzzles and old folk toys she made at craft fairs. She also dove headfirst into her new community.
“I’d never lived in a small town before. I’d lived in suburbia or the city,” she said. “But the first couple of years we were here, the town was planning a bicentennial celebration, and I joined the quilt committee. It was a good way to get acquainted, finding people who are interested in the same things you’re interested in.”
Over the years, she moved on to handling publicity for the town’s historical society, and managing the local newsletter. Her husband, who worked with antique tools and books, died in 2000, but she continues to be actively involved in the community.
Nine years ago, she was appointed to the town’s zoning board of adjustment. She served as chairman for a term or so, and still remains a member. Today, she also belongs to a casual group of local women of all ages and skill levels who meet once a week to knit and to socialize.
Among them is Roberts’ longtime friend, Gretchen Wittenborg, who founded and hosts the group.
“I find the trajectory of Jane’s career extraordinary,” she said. “She put herself through four years of college working as a printer, then worked at the most famous settlement in the country. Then she put herself through grad school.
“Jane is a marvelous teacher. She never stops learning. She can do so many things,” she said. “If there’s something interesting to learn or to do or to read, she’s there. She’s never bored. She’s open to anything.”
Although Roberts and her husband had no children of their own, children have been a major focus in her life. Besides her careers as a teacher and social worker, she worked every year at the same summer camp in Ontario, Canada, for nearly two decades beginning in the late 1950s. Originally, she served as a crafts instructor, and later was in charge of planning extended overnight canoe trips for young campers.
It was at camp that she first learned to make canoe paddles with hand tools, an art she continues to practice.
“I figured that if I was going to teach the kids, I had better learn how to do it myself,” she said. “I loved working at the camp. I used to say I’m getting paid for playing. It ceased operation in 1970, but I still keep in touch with a lot of the people.”
As for the future? She plans to pursue whatever new interests arise, and continue to follow her passion for printing.
“I’d like to stay in printing for as long as I can,” she said. “For as long as I’m having fun.”

You'd think that article would satisfy me, but no. I decided I had to contact her to thank her for the little book, which has meant so much to me. She seemed quite pleased to hear that, and we began a bit of a correspondence, and I learned that not only does she have a history in printing, but in making handmade wooden toys and puzzles, too! And she was kind enough to send me some -- they are absolutely charming -- and some of the puzzles are quite clever, I'd never seen them before.

I guess what I'm trying to say is that the world is full of amazing people... just keep your eyes open for amazing footprints -- you never know where they might lead!
Posted by Jesse at 10:20 AM