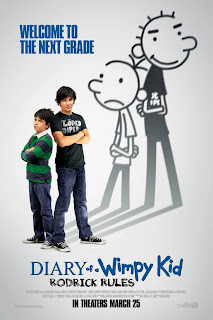 I continue to be fascinated by this series. The second movie manages to do a good job of staying true to the storyline of the second book, but it accomplished the same shocking feat the first movie pulled off: redeeming the main character, who is surprisingly awful, considering it is a book for kids. This one actually pulls a double, because it redeems two irredeemable characters.

This series has captured something that is in the air right now -- I think that is why it is so successful. There is an ignorant selfishness that has become the norm for so many kids... It was the main theme in the tv show Dead Like Me, and seems to be a primary driver of A Heartbreaking Work of Staggering Genius (still reading that). What I don't get is where this attitude comes from... is it from being spoiled? From being too cut off from nature? From being treated as children too long? I don't know, but it makes me sad. The movie isn't sad, though -- it's fun. The magic act at the end was my favorite part, by far.
Posted by Jesse at 12:11 AM