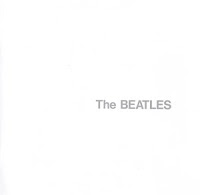 I get a certain weird satisfaction from the fact that I'm publishing my 100th post about the white album, on its fortieth anniversary. I've listened to it many times, of course. I remember my first time: Christmas, 1986, a present from my parents. I'd been listening to the Beatles fervently, and listening to the white album was like taking my relationship with them up a notch. It is such as strange, personal album, full of the kind of things that are hard to do before people take you seriously. I mean, if this had been one of their earlier albums, it would have really put people off, I think. But coming as late in the "relationship" as it did, it worked out. I never really thought about the gradual intimacy between a band and it's fans, but that's just how it is.

For me, the heart of the album is "Happiness is a Warm Gun." It is soulful, ironic, and connects to almost all the musical styles on the album, one way or another. I often think about how the title is a parody of Charles Schultz's "Happiness is a Warm Puppy," and how strange it is that if he hadn't created that one comic that one day, it would have changed the white album forever.

It is said that once a reporter asked Paul McCartney if he had any regrets about the white album... because, surely, if the stranger, more experimental songs were removed, taking it down to a single LP, pretty much every song on it could have been a hit. McCartney replied that, "Yes, we could have done that. But then it wouldn't be the fucking white album, would it?"
Posted by Jesse at 12:21 AM