Now: The Physics of Time 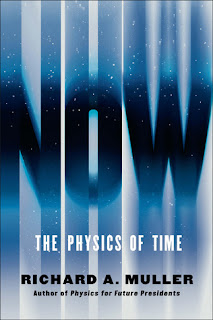 I am very interested in the nature of time. I often have the feeling that some things are predestined, or at the very least, that the future is speaking to us, urging us in certain directions. I often wonder if the many-worlds hypothesis is true, that somehow future worlds are urging us to choose one or another in some way, by sending some kind of signals from the future.

So I was certainly interested to read this book by physicist Richard Muller about the nature of time, and specifically about the nature of "now." It is a pleasing book, written for the layperson, with many amusing stories from the history of physics. It provides a guided tour of Einstein's insights about time, as well as some of the problematic aspects of quantum physics when it comes to time -- particularly the collapse of the wave function, which seems to happen faster than light through space. He talks quite a bit about Feynman's interpretation of antimatter as traveling backward in time, and makes much of Dirac's misinterpretation of what positrons are. He also spends a lot of time beating up on Eddington's theory that time is really just entropy increasing. It is a problematic theory, because it can't be verified or falsified, and it has some obvious things that don't feel right about it.

But in the end (finally) Muller gets to his big theory (spoilers ahead): Unlike some physicists who believe that now is an illusion, and that spacetime is a block, Muller believes that now is very special indeed. He argues that time moves forward because like space, time is expanding, as a result of the big bang and the accelerating growth of the universe. In this view, the past cannot be changed, and the future does not exist yet, because time is being generated as the universe expands along the time axis. This takes some thinking to get one's head around, but there is no obvious way to refute it that I can see. He argues that perhaps it could be shown experimentally by looking at the light from old galaxies -- since the universe's growth is accelerating, he argues that time must be accelerating too, and this might be observable as "extra" red shift on older objects in the universe. He also suggests something complicated about time being generated around black holes that might be observable.

This feels like a very personal argument he is making. He seems frustrated that many physicists seem to take for granted that there is no free will; he makes many arguments against "physicalism," the idea that physics can describe everything. He argues that if the decay of particles can't even be predicted by physics, how could anything more complex? All the talk of free will and falsification reminded me of a theory of my own: that any being that feels it has free will can never experience falsification of free will. For, you can only prove to me that I don't have free will by showing me my future actions, and if you do that, I can deviate from them. This sounds sort of silly, but the more I think about it, the more important it seems. If I knew more philosophers, I would bother them about it, because though I've read a lot about the nature of free will, I've never heard this idea mentioned.

Anyway, Muller's book was enjoyable, and certainly gave me a lot to think about. I certainly hope I live to see the day that quantum measurement is understood. Most fascinating is the fact that if Muller's theory can be proved, it would have a significant impact on the world of philosophy. I guess we'll see... in the future.
Posted by Jesse at 10:35 PM