Zap! The Rise and Fall of Atari 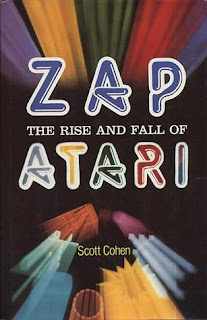 I was in the library the other day, and it occurred to me to search for "Atari" in the card catalog, and I found this book by Scott Cohen. It has a very interesting perspective, given that it was written in 1984, right as the videogame crash was happening. The author, who makes no secret of the fact that he doesn't like videogames, and who suggests that everyone in silicon valley is an alcoholic and/or a drug addict, sees the crash as evidence of the end of a fad. I remember distinctly, in second grade, seeing a "Scholastic News" article (printed on that colored pulp paper back in the 70's) asking the question "Are videogames just a fad?" and I remember thinking that was absolutely impossible. And I guess I had it right, unlike videogame hater Scott Cohen. However -- he had some other things quite right indeed, that I'll get to in a moment.

Okay... what did I learn from this book?

1) A lot of details about how Nolan Bushnell ran his businesses. He was incredibly vision oriented, without a lot of focus on practicalities. Making a machine for $1100 and selling it for $1000, like he did with Gran Trak 10? We'll make it up in volume. Focus on one thing at a time? Nope... arcade games, home games, and even Chuck E. Cheese were all worked on simultaneously. I had always seen Pizza Time Theater as something that game later, but no, it was created in parallel with Atari.

2) Space Invaders was very, very important. As I mentioned here, I knew that it transformed arcades... but what I did not know was that it also transformed home video games! After all, The Atari, the Odyssey, and the Fairchild Channel F system were all out on the market in 1977, and mostly, people didn't care. But when Space Invaders hit in 1978, suddenly the world went videogame crazy, and not only did this change arcades, but suddenly people wanted home systems too, and Atari rode that to great success. And of course, the fact that they landed the first videogame license ever (Space Invaders) helped them enormously.

3) After Warner bought Atari ($28M) they managed it well at times, getting strong licenses (like Pac-Man) but other times managed it incredibly badly. It seems they were arrogant, and did not really understand the retail business, even though Atari had become 70% of their revenue! Their biggest mistake was 1982, when they didn't realize that retailers were cancelling orders all over the place, and they kept manufacturing anyway, which led to the famous ET debacle. They found themselves in a situation where they were creatively bankrupt (just LOOK at 2600 Pac-Man) and also had no grasp of the business they were in.

Again, this book was written 33 years ago, and so it is amusing to hear the thinking of the day on what the future will be like. Scott talks endlessly about the promise of holography (people really believed it was the future of displays), and how "nothing will surpass the laserdisk", which is all very quaint. But then he says something rather startling. He suggests that the next big thing might come out of Bell Labs. "Although a communications company like Bell is not an entertainment company like Warner, it can leap-frog the entertainment industry. People can be entertained by something outside the entertainment market; it's just a question of how you define entertainment... Look at what people spend their money on. If there were a neat little terminal and it put people in touch with everything they wanted to be in touch with, people would stop playing video games." That sounds an awful lot like a vision of the web browser to me, and back in 1984. I guess it should come as no surprise to me that his inaccurate projections come from looking at technology of the day, and his accurate ones come from looking at what people actually want... that is, after all, the only method that works!
Posted by Jesse at 7:53 PM