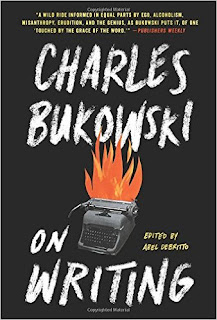 I was excited when I found this "On Writing" book of Charles Bukowski letters edited by Abel Debritto. It is a collection of his letters that relate to writing and creative process. I was assuming it would be letters full of good, solid, thought provoking advice. I've always connected with Bukowski's writing, especially the poems. There is a raw power, and a kind of brutal honesty that I always enjoy.

Unfortunately, I think this book might have ruined Bukowski for me! They say you shouldn't get too close to your heroes, and I think THEY ARE RIGHT. I had always lived with the illusion that he lived his life like he tells it in his many poems. One day at a time, focused on hedonistic pleasures until life catches up with him, and then trudging through the dull parts of life until he could break away and live in the moment again, and occasionally banging out a poem along the way. Instead, these letters paint a picture of a neurotic, obsessed with how people see him. He talks endlessly about comparisons to other poets, making clear that his uneducated affect is just an act. Instead of a happy-go-lucky drunk, instead we see an obsessed, neurotic drunk, whose self-esteem is defined by how his poems are received. The way he paints his life in the poems always seemed a bit too good to be true, and these letters make clear that it was. I can't decide if this make Bukowski a more complex figure, or a simpler one. It does make clear, though, what he was wrestling with... a desire for immortality.
Posted by Jesse at 6:27 PM