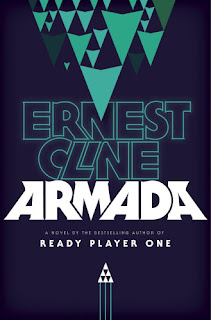 I wanted to like this -- I really did. I mean, I loved Ready Player One. LOVED it. Loved it so much I never wrote about it in this blog, because I just had WAY too much to say about it. Guess I should write that sometime. But this didn't grab me nearly as much. Firstly, the nostalgia wasn't there, which was a major hook of RP1. I mean, sure, he drops 2 or 3 cultural references on every page, but references are one thing, visiting the places of our youth is another. It probably doesn't help that I have no love for "jet fighter" games. Never could manage to sit through Top Gun, thought Microsoft Flight Simulator was super dull, didn't care about playing X-Wing, and, I'm going to say it, The Last Starfighter was just plain dumb. I don't care about space combat stuff, I don't know why. All that racing and chasing just always seemed both dull and violent to me. Like Sun Tzu said, "Warring is Boring." And this is a whole book about warring. Kind of like a pale shadow of Ender's Game. See, I actually liked Ender's Game, because it wasn't actually about racing and chasing, it was about human psychology, and it had a point. If Armada has a point, I guess I missed it. Jeez, I'm sounding really harsh about this. I mean, I didn't hate it, I just wanted to like as much as RP1, and I really didn't. There were moments in it that I thought were kind of fun -- but I wanted them to be deeper. In some ways, it felt like this was written to be a movie -- everything was very action oriented, and happened very fast. Another thing I didn't care for much: during the whole book there is a looming "mystery" that is kind of rubbed right in your face, and you can see clearly that the whole book is moving toward that mystery... and unfortunately, when it was revealed, it didn't surprise me much. Also also, putting on my VR nerd headset for a minute, the idea that lots of people play FPS and dogfight games in HMDs seems pretty unlikely, given how motion sickness works.

Wow, what a lot of nerdly complaining from me! I'm worried I'll hurt Ernest Cline's feelings, but I kind of have the idea that working on the movie of RP1 with Steven Spielberg will console him. I did have some fun reading the book, and if I had any space combat fantasies, I probably would have liked it a lot. And whatever Cline writes next, I'm sure I'll read that, too!
Posted by Jesse at 11:25 PM