In the Surgical Theatre 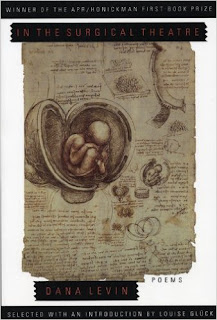 I found my first Dana Levin poem in an issue of Poetry magazine, and I was really struck by the fluidity, the clarity, and the cleverness of her poetry. So, I picked this up, her first book of poems, since it seemed to be her highest rated book, as well. Unfortunately, I mostly found it too disturbing to read! Most of the poems are about surgery, both real and metaphorical, and as a result are full of gory imagery. They were beautiful, nonetheless, but I have a low tolerance for gore. They weren't all gory, however. One weirdly poignant poem was about the sexual frustration of a teenage boy, and the one that was by far my favorite was just called "Movie." Some excerpts here:


EXIT,
blood-red beacon in the dark.
The screen gray like smoke, gray
as a scrim of ash,
the red curtains furling round it like flames.
Red curtains, red walls, red seats and carpet, even our faces
under red reflected shadows--
Me and two kids and a man.
...
I went in, I waited, for the flashes and burns
of another blockbuster, for the requisite explosions
and hip bon mots,
for the red aesthetic
slaughter--
And the two kids: what did they want?
A little chaos, a little blood
to make their day, their unpredictable fragmented day--
And the man,
what did he want?
O long tunnel out of despair, distraction of someone else's
story---
...
Arnold, Disney, Mafia two-step, make us, make us
be--
something else for awhile.
...
To give up the burden awhile.
To be an eye.
Perceiver.
God of the Kingdom

It is much longer than that, but those are the parts that most resonated with me. The notion that a film lifts our burden of existence by letting us be something else, someone else is a powerful idea.... but it ends with an even more powerful idea -- that watching a movie is to become God. All-seeing, all-knowing, but powerless to interfere. I've never heard anyone make this comparison before -- it simultaneously elevates the role of the viewer, and questions the role of God. Would would it mean if God felt as powerless, as frustrated, and sometimes as moved watching us as we do when we watch a movie?

Anyway, I certainly plan to seek out more Dana Levin poems... for her poetry has a beauty and a power and a whole living quality feels somewhat unique. I just hope it all isn't so gruesome!
Posted by Jesse at 11:36 PM