A Small Collection of Poetic Artistry 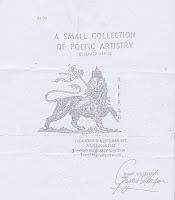 I don't remember where I was, exactly, (maybe DC?) but an older african-american fellow calling himself James F. Harper approached me on the street, and said he was selling copies of his poetry. The copies were simple Xerox copies of his handwritten poetry. It excited me, somehow -- I think all poets should sell their works on the street this way. He asked for five dollars, but I only had three. "Better than nothing," he reasoned. My favorite of the poems was "The President":


"The President"
If I was the President
I'd give everybody a ride on Air Force One,
I'd let you see all parts of the world
We'd have a whole lot of fun.

If I was The President
All of the little children
Would have a home, and plenty of food to eat,
Plus, everybody would say hello - and how are you
To everyone they meet.

If I was The President
They would elect me on a Friday,
Assassinate me on a Saturday,
Bury me on a Sunday,
And everybody would take their asses
back to work on Monday.

If I was The President

So, yeah, if you see poems for sale on the street, buy them!
Posted by Jesse at 4:22 PM